Venice Beach’s Battle of the Boardwalk 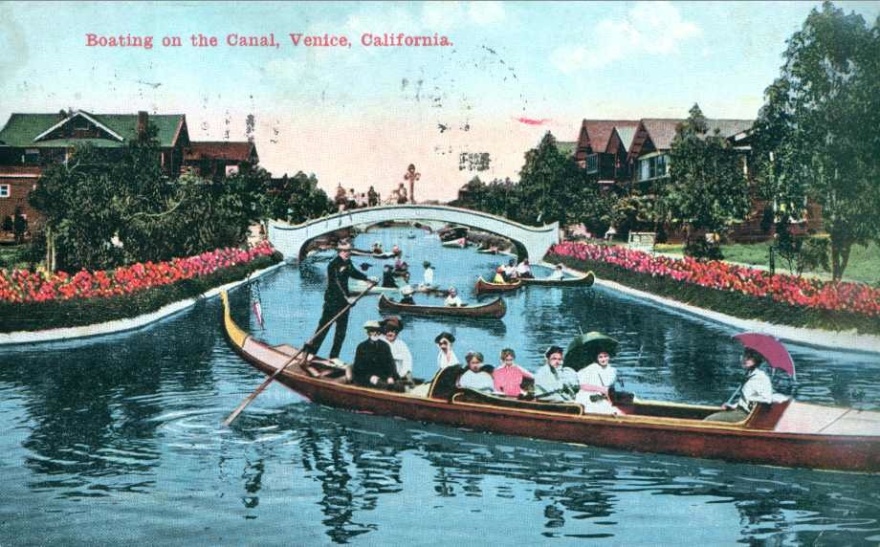 This placid scene a century ago stands in stark contrast to the roiling issues that grip the seaside L.A. neighborhood today. Postcard, ca. 1905.

Venice Beach is widely known for its carefree, bohemian air. Having enticed successive waves of Beats, hippies, punks, roller-derby fiends, and other nonconformists for decades, the funky Los Angeles neighborhood along the Pacific is among the inheritors of a long tradition of quirky enclaves in America: New York’s Greenwich Village, New Orleans’s French Quarter, San Francisco’s North Beach and Haight-Ashbury, Cleveland’s Coventry Village, Miami’s Coconut Grove, and Atlanta’s Little Five Points, to name but a few. This image is so pervasive that few can believe Venice had its origin as a master-planned residential community laced with gondola-plied canals that conjured its Italian namesake, as architectural historian Philip Gruen describes in American Tourism.

Like other counterculture havens, Venice Beach became noted for the free-spirited joie de vivre cultivated unconsciously by its offbeat denizens. And, as in many such places, the effort to tend this edgy image while also nurturing tourists’ expectations of clean, attractive, safe, and predictable spaces has proven difficult. New Orleans has struggled for decades to accommodate and also regulate French Quarter artists, musicians, peddlers, tarot readers, and street performers who vie daily for limited space on the flagstone pedestrian mall along the iron fence around Jackson Square.

In the last couple of years Venice Beach has endured similar tensions, in this case between longtime artists, musicians, and performers and a new wave of hawkers that by many accounts are aggressive and adversarial. As The Guardian recently reported, the clashes that ensued made strange bedfellows of self-described free spirits and the Los Angeles Police Department, prompting public responses ranging from relief that law and order might be reinforced (including ousting the homeless) to concerns that such actions were the leading edge of hidden agendas to prime Venice for lucrative high-class developments, as Martha Groves has detailed in the Los Angeles Times.

More likely, it seems, is more of the same: embellishments to the beachfront like a proposed 175-foot-tall Ferris wheel and a zip line that would simply reinforce a longtime function of Venice Beach as a seaside carnival of sorts while also feeding more revenues into a cash-strapped city government. Indeed, as Gruen observes, despite the original vision of an American Venice a century ago, when the going got tough, this gritty west-coast urban village turned to a Coney Island-style amusement park by the sea.