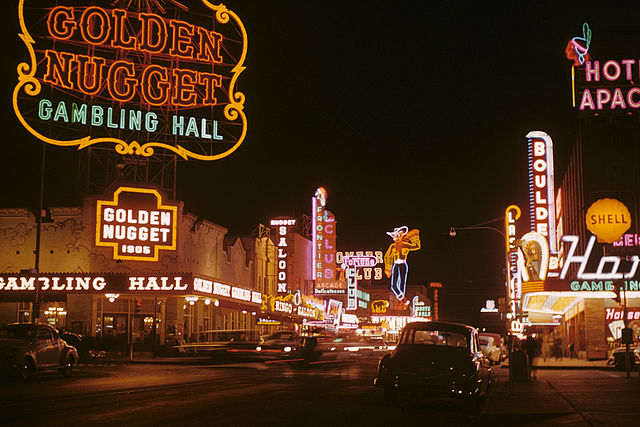 Fremont Street in Las Vegas. Best known these days for its four-block, LED-canopied pedestrian mall (Fremont Street Experience), the Nevada city’s pre-Strip focal point for casino gambling has also become something of a memory machine. For well over a decade, the Neon Museum has been building its collection of significant but unwanted signage. Las Vegans did not invent neon signs. That honor goes to an early 20th-century French inventor, Georges Claude, who pioneered the electrification of neon in glass tubes. But nowhere has neon been more central in forging an image than in Sin City, which wowed midcentury visitors with garish, larger-than-life signs that towered above the low-slung architecture of the casinos and motels they advertised. As Las Vegas entrepreneurs added ever more elaborate resorts with thousands of rooms and mammoth themed architectural monuments, the neon-decked establishments seemed obsolete.

Fearing the loss of what many came to see as a dying Las Vegas art form, arts-minded leaders teamed with the city to create a museum to salvage signs that might otherwise become junkyard scrap. The Neon Museum was born. Now a non-profit organization, the museum has existed in large part as a series of installations of neon signage in the vicinity of the Fremont Street Experience. Soon it will have a visitors center to unify its collection – fittingly, it will occupy the lobby of a former Strip motel, but not on the Strip. La Concha, opened in 1961 and closed four decades later, is now the site for a new condominium development.

One of the most iconic early motels on the Las Vegas Strip, La Concha was an anachronism years before its closure in 2003. Its space-age parabolic lobby made an otherwise bland suburban-style motel a symbol of midcentury Las Vegas. The “museumification” of old Las Vegas is an understandable response in a place that despite relentlessly planning to woo future tourists cannot help but create nostalgia along the way.

Chief Hotel Court sign. This 1940 sign once stood over a hotel on Fremont Street. It made an eight-block trek up the street to its new home next to Fremont Street Experience, where it is part of the Neon Museum’s self-guided outdoor museum tour. Photo by dbking on Flickr